Michele F. Lowrance has been a domestic-relations Judge in the Circuit Court of Illinois since 1995. A child of divorce who was raised by her grandparents, Judge Lowrance is twice divorced. She has devoted her professional life to helping those similarly situated.

Her approach is wholistic, encompassing the emotional and financial aspects of divorce. Judge Lowrance brings unique problem solving skills to even the most high conflict cases, recognizing that successful breakup or divorce signals a changed relationship more often than simply an ended one.

Judge Michele Lowrance is the 2015 recipient of the prestigious Samuel S. Berger Award, which recognizes attorneys and judges who exemplify the highest standards of integrity, courtesy, knowledge of family law, and the extraordinary ability to solve human problems. 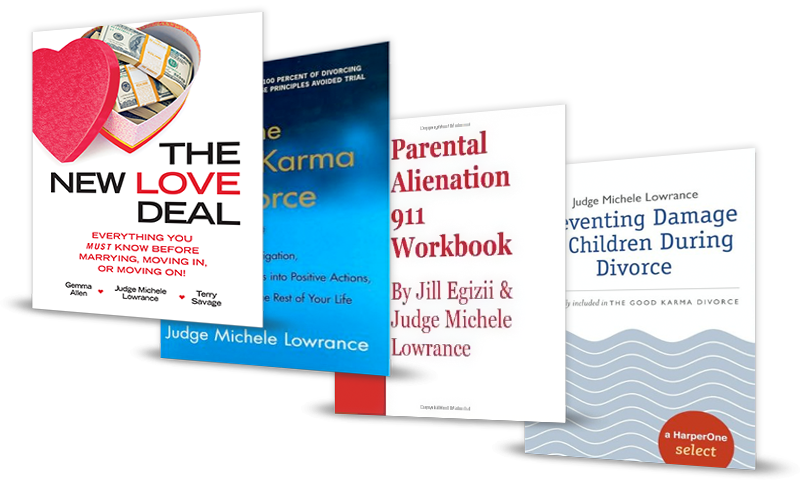 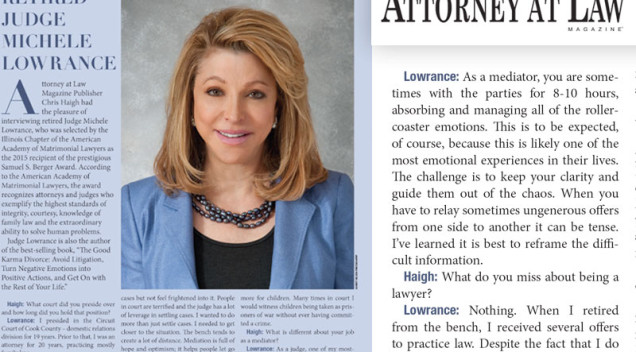 Attorney at Law Magazine Publisher Chris Haigh had the pleasure of interviewing retired Judge Michele Lowrance, who was selected by ...
Read More 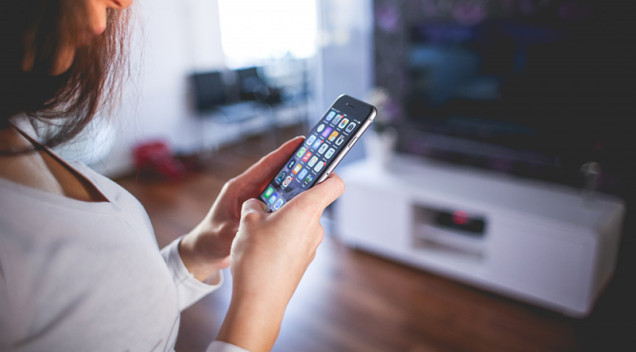 The only thing that does not change is change. Lawyers must modify and change the way they prepare for highly ...
Read More

Informing your child about your divorce Read article on childanalysis.com The first step and maybe the most difficult for divorcing ...
Read More

Reviews on Judge Michele Lowrance and The Good Karma Divorce:

Avoid Litigation, Turn Negative Emotions into Positive Actions, and Get On with the Rest of Your Life:

“Judge Michele skillfully offers a new formula for healing the heart, mind, and body in the depths of adversity.”
– author Deepak Chopra

Meditation is an alternative to the formal process of divorce court. Mediation is a process where parties in the midst of a divorce or family breakup work with a mutually selected, neutral third party to assist them in the negotiation of their differences. The mediator acts as a bridge between opposing interests, helping to bring parties together by clarifying and defining issues and eliminating obstacles to communication.

Michele Lowrance has been a special guest and mediator on the MSNBC series Chained to My Ex, Good Morning America, NBC Today Show, CBS Morning Show, Court TV, Curb Your Enthusiasm panel discussion, EXTRA, and American Justice with Bill Kurtis; co-host of the radio program Family Matters on Syndicated News.net; and producer and host of the talk radio show Your Health Matters on Infinity Broadcasting.

Michele Lowrance is a regular contributor to the Huffington Post. Utilizing her expertise as a former divorce attorney and family court judge, Judge Michele Lowrance offers concrete advice from the bench, real-life stories, no-nonsense tools, so that you will be able to prevent collateral damage and protect what we all value most. See All Blog Entries

How to Survive the Divorce Epidemic

If you want to withstand the divorce epidemic you must self-vaccinate by learning upgraded conflict skills. The skills that I am going to give you may make the difference in determining if your marriage will last. A recent study at the University of California reports that divorce tends to spread through groups, and that the emotions can be transferred like a virus. We all know marriage has been blasted to its core. The assumption that marriage means a lifelong commitment where couples remain together amid discomfort or unhappiness is no longer prevalent. On top of that, new studies tell us ...
Read More

Dear Judge Michele, My wife brought her new boyfriend to court. It made me so angry I had to walk out. We have been separated for only a month. I can't even look at her, let alone divide our belongings. What can I do? --Separated for a Month Dear Separated for a Month, You've got a classic problem that happens more than you think. The wife wants to have moral support, show off her desirability and, at the same time, show you what you are losing. A trifecta, yes. A hostile angry act? Definitely. Probably crystallizes most of what has ...
Read More

How Your Breakup Now Affects Your Future Karma

"I don't think this relationship is going anywhere, its not you its me, or I think we should see other people." No matter how you say it breakup is torture. Whether you are divorcing or just breaking up with a partner, separating is a unique moment in time that can alter the rest of your life or theirs. For 15 years I have watching the results of break up in my courtroom in divorce court. It is now so clear to me that how the initial breakup is handled sets the tone for the entire process. The manner of breakup ...
Read More

Can We Learn From Our Past Relationships?

As a judge in family court, my daily hope is that break ups become less common. But the facts do not support my desire, and the cultural reality is that the national wedding bouquet is soon to be constructed of short-blooming day lilies. Unfortunately, multiple romantic relationships -- whether married or dating -- and the termination of those relationships have become part of our cultural evolution. Since we have not yet found a cure for this epidemic, we must create a way to not only survive, but thrive in this reality. In our world, where we pride ourselves on innovative ...
Read More

Breaking the News About Divorce

How To Tell Your Spouse You Want A Divorce How You Commence Your Case May Define It’s Conclusion. Judge Michele, I have been thinking about divorce for over a year. I waited till after the holidays, and now I am scared and at a loss how to go about telling him. At a loss Newark, NJS Dear At a loss: You have waited to have ‘the conversation’ with your spouse and you have gone over it in your mind endlessly. You can no longer pretend that the marriage is working. It is show time! You have watched other divorcing people ...
Read More

I have been a judge in family court for seventeen years and, with few exceptions, I have found that those who insist on sole custody of their children often don’t really know what it entails. In fairness, neither do those who insist on joint custody. Divorce is hard enough, but deciding what type of custody to choose is not only difficult but also fraught with confusion. Unfortunately, because of this confusion, there is a lot of unnecessary expense and heartache. It’s true that sole custody has attributes that joint custody does not that favor the custodial parent; for example, it ...
Read More

How to Prevent The Wedding Black And Blues: The Child You Had with Your Ex is Getting Married The last time you saw your ex-husband, maybe you said to yourself: “I will see him in hell.” Perhaps you thought of a milder version of distain: “I hope I never see him again as long as I live.” But life has taken charge and you are staring down the barrel of your first, albeit forced reunion — the child of your marriage is getting married. With only three months until the wedding, thoughts race through your mind: “How could my child ...
Read More

As a judge in Family Court for 19 years I can tell you the divorcing process can be jagged and unpredictable. The people are usually raw, frightened and bewildered. It is hard to imagine that given these complexities a court of law can design a better fate for families then they can for themselves. After the years of witnessing the adversarial process one thing has become clear to me. Mediation is one of the most important tools that exist to resolve conflict. So deeply do I hold that belief that at the time of this reading I will have made ...
Read More